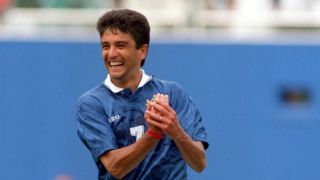 Remember Bebeto's famous 'cradle-rocking' celebration at the 1994 World Cup? Well, don't feel too old, but that child is now all grown up and has signed for Portuguese giants Sporting CP.

After hitting the back of the net in the quarter-final against Netherlands, the Brazil forward commemorated his strike in iconic fashion alongside team-mates Romario and Mazinho – the father of Rafinha Alcantara and Thiago Alcantara.

The celebration was in reference to his new-born son Mattheus Oliviera, and Bebeto had even more reason for joy as Brazil went on to lift the trophy.

Mattheus is yet to hit the heights of his father's career but, after making his way through the youth ranks at Flamengo, he impressed enough in two seasons at Primeira Liga side Estoril for Sporting to hand him a five-year contract.

The 22-year-old, who was linked with Juventus after breaking into the Flamengo side in 2012, has a €60million release clause included in his deal.

After the transfer was announced, Bebeto tweeted: "So proud of you, son!!! Continue working hard and with humility you will go far!! You can enter the history of @Sporting_CP!!"

Mattheus told Sporting's official website: "I chose Sporting CP because of the greatness of the club. I am very happy with this opportunity and I did not even think twice when the opportunity arose.

"I want to make history at Sporting CP."