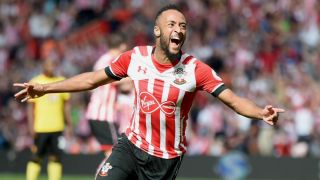 It ended honours even in the battle between Premier League managerial debutants at St Mary's Stadium as Claude Puel's Southampton battled back to claim a 1-1 draw against 10-man Watford, under the guidance of Walter Mazzarri.

Etienne Capoue drew first blood for the visitors when he made the most of sloppy Southampton defending to finish emphatically in the ninth minute.

Mazzarri employed a 3-5-2 system and used width to attack a shaky home defence in the moments after the opener, with right wing-back Nordin Amrabat to the fore.

Southampton recovered their poise, but, having lost their two top scorers from last season – Sadio Mane and Graziano Pelle – they seemed to lack in cutting edge up front before Nathan Redmond memorably marked his debut just prior to the hour.

A close-season signing from relegated Norwich City, Redmond was ambitiously compared to France great Thierry Henry this week, and he provided an assured finish.

Watford's attacking ambition effectively departed alongside red-carded substitute Ben Watson with 14 minutes remaining and they earned a reprieve when Redmond was correctly flagged offside as he found the net for a second time.

In the second minute, Watford goalkeeper Heurelho Gomes saved unconvincingly from Dusan Tadic, pushing a free-kick back into a crowded penalty area before recovering to keep out a ricochet off defender Miguel Britos.

Capoue gave away the foul that lead to the early scare, but the French midfielder soon made a more memorable contribution to the contest when Southampton allowed him to break into the area unattended to smash home Troy Deeney's knockdown.

Shane Long was unable to head in at the back post after some intricate trickery from Tadic in the 32nd minute, with replays suggesting Amrabat had a handful of the Southampton striker's shirt as he leapt.

There was concern for Mazzarri and the Watford bench when Gomes pulled up, feeling his right hamstring after a clearance, but the ex-Tottenham man resumed to close out an impressive first half from the visitors, while a miserable period for Long concluded with the Republic of Ireland international requiring treatment following a muscular challenge from Sebastian Prodl.

Gomes still appeared in discomfort at the break, but he showed fine reactions when he got down to keep out Redmond's 57th snapshot.

Unfortunately for the veteran goalkeeper, in not wholly unfamiliar scenes, he failed to claim two consecutive corners following the save and Redmond punished the second error with an unerring left-foot volley.

Puel celebrated in animated fashion on the touchline and his men remained on the front foot, with the odds stacked more heavily in their favour when Watson, who had only been on the field for 12 minutes, allowed the lively Long to charge around the outside of him and responded by bundling his rampaging opponent to ground.

Referee Roger East deemed the infringement to be denying a clear goalscoring opportunity and Southampton thought they had the points in the 86th minute, but the assistant's flag halted further Redmond jubilation.