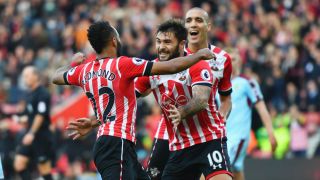 Charlie Austin once again proved a thorn in the side of former club Burnley as he scored twice in Southampton's classy 3-1 Premier League victory.

The England striker had scored on both his previous two top-flight appearances against the Clarets and he extended that record to four in three.

Burnley goalkeeper Tom Heaton was in inspired form in the first half, including a stunning early save from Austin, but the wheels came off for the visitors after half-time.

Austin started the scoring with a scrappy opener from a corner, before Nathan Redmond's fine finish from another set-piece doubled the lead just after the hour.

Southampton benefitted from a somewhat harsh penalty decision for Austin to make it three from the spot, but a run of six straight clean sheets was brought to a hasty end from Sam Vokes' spot-kick after Dusan Tadic was judged to have pulled Ben Mee's shirt.

Nevertheless, Saints move up to eighth after a comfortable outing made it 10 points from their last four league games, while Burnley remain 14th and just a point above the drop zone.

Southampton controlled the early exchanges and would have been in front in the fifth minute if not for Heaton's superb save.

Matt Targett's teasing delivery from the left was met by Austin, whose glancing downward header was brilliantly parried around the post by Heaton.

Saints lost Targett to injury with Sam McQueen handed a Premier League debut and a lull in proceedings followed the premature change.

The home side found their rhythm, though, and Heaton again came to Burnley's rescue by rushing to deny Tadic, who sprung the offside trap, when one-on-one.

Johann Berg Gudmundsson saw penalty appeals waved away following a challenge from Virgil van Dijk, and at the other end Burnley were handed a let off when Austin collected Tadic's superb long ball only to scuff his shot with only Heaton to beat.

The Clarets lost key man Steven Defour to injury shortly before the break, while Heaton parried Nathan Redmond's fierce drive, with Austin making a hash of the follow up.

Burnley's resolve was finally broken seven minutes after the break, though.

Tadic's in-swinging corner from the right found Van Dijk at the back post and, although his header was blocked, Austin showed his predatory instincts to bundle home from close range.

And the game was put beyond Burnley on the hour mark.

Steven Davis provided the corner this time and Redmond brilliantly picked out the bottom right corner with a drilled half-volley.

Things worsened for Burnley when Gudmundsson clumsily bundled into the back of McQueen in the area and Austin coolly rolled his penalty low to the right of Heaton.

Another penalty brought an end to Saints' run of clean sheets with Vokes going down the middle after Tadic was penalised for pulling Ben Mee's shirt.

But the goal did little to spark a Burnley comeback and if anything Southampton could have extended their lead late on, with Davis, Jose Fonte - celebrating his 250th Saints league appearance – and Jay Rodriguez all going close.