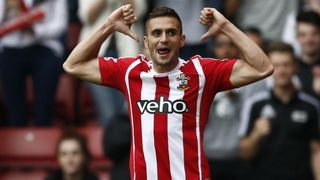 Southampton manager Ronald Koeman had to address more speculation surrounding his players on Sunday, stating Victor Wanyama was not "mentally and physically good enough to play" amid continued talk of a move to Tottenham.

Despite Wanyama's absence, Southampton had little difficulty in seeing off Alex Neil's men, whose task was made more difficult when Steven Whittaker was sent off for a second yellow card after only 31 minutes.

Whittaker received his first booking for blocking Matt Targett's attempt to take a quick throw-in and four minutes later he was dismissed for a foul on Tadic.

Striker Graziano Pelle then opened the scoring with a close-range effort on the stroke of half-time after being played in by the instrumental Sadio Mane.

Mane was involved in the second as he set up Tadic for his first in the 64th minute, with the former Twente winger doubling his tally from barely a yard out to ensure a comfortable victory.

Norwich, who made eight changes from the League Cup win at Rotherham United in midweek, were up against it when Whittaker saw red.

The full-back received a second caution after he was adjudged to have impeded Tadic as he attempted to latch on to a lofted Ward-Prowse pass.

Wes Hoolahan was sacrificed for Andre Wisdom in the Norwich reshuffle before Pelle made Southampton's numerical advantage count in first-half stoppage time with a cool finish at the near post.

Southampton striker Jay Rodriguez was brought on for Steven Davis after half-time and Koeman's men remained in firm control following the restart, although they were continually frustrated by the busy Ruddy.

A poor clearance from Ruddy presented Mane with an opportunity to double Southampton's lead in the 56th minute, but the keeper atoned for his error by parrying the Senegal international's stinging drive.

Ruddy had to be alert again to deny Rodriguez following neat build-up play, before Pelle flashed an effort wide as the second goal continued to elude Southampton.

But their persistence finally paid off when Tadic rifled into the top-right corner after the lively Mane crossed from the right.

The game was then made safe by Tadic just three minutes later, although this time in markedly more simple fashion.

Tadic tapped in from point-blank range after Ruddy had done brilliantly to keep out Pelle's downward header as Southampton atoned for their midweek UEFA Europa League exit to Midtjylland in style.