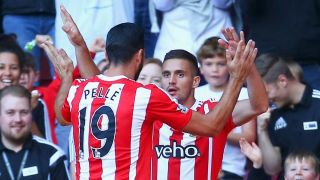 Southampton put in a commanding performance to pick up their first Premier League win in three matches, beating Swansea City 3-1.

Swansea came into the fixture at St Mary's Stadium having not scored for three matches in all competitions and fell behind to a Virgil van Dijk header in the first half.

Dusan Tadic made a mockery of Swansea manager Garry Monk's half-time tinkering by doubling the advantage nine minutes into the second period, before Sadio Mane got the third shortly after the hour mark.

Gylfi Sigurdsson ended Swansea's goal drought from the penalty spot late on after Neil Taylor was felled by Jose Fonte, but it was little consolation for the below-par visitors.

After making a promising start to the season, Swansea have now gone the whole of September without registering a victory, while Southampton climb into the top half of the Premier League table with their three points.

Monk brought Ki Sung-yueng in for Jefferson Montero as part of a diamond midfield formation and, after Southampton – who handed a first start of the season to Ryan Bertrand – had enjoyed a bright opening spell, the first clear-cut chance of the match fell to the South Korean.

A fierce Jonjo Shelvey strike from distance was parried into the path of Ki, who was unable to keep his effort down.

The home side were soon causing a threat at the other end and Graziano Pelle took out three Swansea defenders with a throughball before Mane shot narrowly wide of the right-hand upright.

Van Dijk broke the deadlock in the 11th minute when he was allowed too much space in the penalty area from a James Ward-Prowse corner and headed in at the near post.

Swansea were struggling to bring forward duo Bafetimbi Gomis and Andre Ayew into the game, but Ki drew a diving save from Maarten Stekelenburg with a low drive after 22 minutes.

The visitors' lack of potency was recognised by Monk at half-time – the Swansea boss bringing Eder and Montero on for Gomis and Jack Cork respectively.

If Monk hoped those changes would swing the match in his side's favour, he was wrong.

Southampton doubled their lead in the 54th minute, when Tadic chipped over Lukasz Fabianski from close range after getting on the end of a delightful lofted pass from Pelle, although there was some suspicion the ball deflected off Ki on the way in.

Any ambitions Swansea held to reel in their hosts were soon dispelled when Mane fired a low effort into the bottom right-hand corner of the goal from the centre of the penalty area.

Swansea's efforts to reduce the deficit were limited, but Sigurdsson pulled one back from the spot seven minutes from time after Fonte's challenge on Taylor.