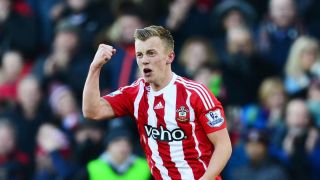 Southampton claimed back-to-back victories in the Premier League for the first time since early November thanks to a James Ward-Prowse double in their 3-0 win over West Brom.

The England Under-21 midfielder had scored just once in his previous 92 top-flight appearances for the Saints, but took his tally to three with a superb free-kick and well-placed penalty, before Dusan Tadic completed the win.

After thumping home the game's opener early on, Ward-Prowse bagged his second after 35 minutes following a clumsy challenge by Craig Dawson on Matt Targett.

The game's third goal did come eventually, though, as substitute Tadic secured the three points for Ronald Koeman's side - the Serbian firing home nine minutes after replacing Mane.

With new signing Charlie Austin watching from the stands, Southampton – who made two changes from their win over Watford – made a positive start and found themselves ahead after five minutes.

A poor challenge from Dawson on Mane gave the hosts a free-kick 25 yards from goal, and Ward-Prowse curled home the set-piece with unerring accuracy.

Buoyed by the goal, Southampton began to dominate possession, but West Brom still posed a threat on the counter and went close to levelling in the 10th minute, when Craig Gardner – one of three new faces for Albion – headed James McClean's cross wide of goal.

With Gardner and Shane Long having wasted opportunities at either end, Southampton doubled their advantage just after the half-hour mark as Dawson was adjudged to have fouled Targett in the penalty area.

Ward-Prowse assumed responsibility from the spot and coolly sent Boaz Myhill the wrong way to treble his goal tally in the Premier League.

The visitors introduced Salomon Rondon and Chris Brunt after the break, and Pulis' side posed more of an attacking threat in the opening exchanges of the second half.

It did not last long, though, as Southampton came back into the game and should have extended their advantage just before the hour only for Mane to drag his shot wide from a tight angle.

Tadic made no mistake from a similar position, completing Southampton's victory after 72 minutes by lashing the ball home following an exquisite pass from Steven Davis.

Southampton's day nearly ended on a sour note as Long was left writhing in agony following a strong challenge from Jonny Evans, but after treatment he was able to finish the match, much to Koeman's relief.