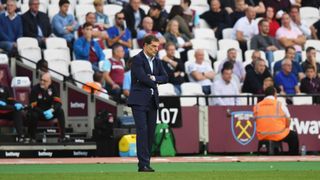 West Ham manager Slaven Bilic admitted his side were second best after they slipped to a 3-0 defeat at home to Southampton.

Goals from Charlie Austin, Dusan Tadic and James Ward-Prowse condemned the Hammers to a fifth defeat in their sixth Premier League game of the season and Bilic admitted his players were forced to gamble in attack and paid the price.

The result left West Ham with a record of 14 goals conceded in their last four league games, but Bilic said he had seen an improvement from his defence in the early stages of the game.

"To be fair, we started well if we are talking about being behind the ball and closing the opponent down, after a couple of games when we were not defending well as a team and conceding eight goals in a couple of games.

"In the first half, in that part of the game, we were quite good. We were quite compact, but we weren't happy with the way we were with the ball – especially in the final third of the pitch.

"We didn't penetrate enough. We were a bit unlucky in the first half. We didn't deserve to be up but it was a 0-0 half.

"In the second half we were trying to get back in the game and we made one big mistake. We had the ball three times in our box and we should have cleared it, but we didn't do it.

The defeat left West Ham third from bottom of the Premier League but Bilic, who will prepare his team to face Middlesbrough, Crystal Palace and Sunderland in their next three matches, said the slump was down to confidence rather than a lack of ability.

"Most of it is about confidence because these are the same players and the same manager that were doing things last year – 80 per cent of the team is like that.

"When you need one or two good results and you're not getting them, it is about confidence. We are working hard at training, we are talking, we are analysing and it is good.

"As soon as the game comes it is good until someone punches you in the face, and then we have a problem."