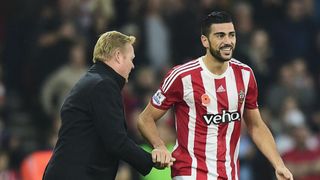 Ronald Koeman will be hoping that the returning Graziano Pelle can provide the firepower his out-of-form Southampton side so desperately need against Watford on Wednesday.

Italy striker Pelle is expected to return to Koeman's matchday squad for the visit of the Hornets after a three-week lay-off with a knee injury.

And with manager Koeman sceptical about spending big in the January transfer window, the responsibility of pulling the south-coast club out of their recent rut will fall largely on the frontman's shoulders.

Southampton have lost eight of their past 10 matches in all competitions, a run that has contributed to Saints slipping to 13th in the Premier League.

Koeman is convinced that Southampton have the talent within the ranks to arrest the slide and the returning Pelle - himself without a goal since November 1 - could be just the kick his team needs.

"It's not always about one player and it's difficult at this stage of the season to bring in one player who will change everything around.

"Maybe if we sign [Lionel] Messi then it looks very positive but that's not at this moment in the season.

"Of course we are trying to turn around several things in the club but we know that at the moment we miss some good attacking players and scoring players, but we have a good squad to turn around it."

Koeman will be without suspended midfielder Victor Wanyama, who serves the final game of a two-match ban, as well as the injured pair of Jay Rodriquez (foot) and Fraser Forster (knee).

Watford, who are ninth, head to the St Mary's Stadium looking to make it four matches unbeaten on their travels.

Key to their success this season has been the form of 13-goal striker Odion Ighalo, who is likely to return to Watford's starting XI having dropped to the substitutes bench in the 1-0 FA Cup third-round win over Newcastle United on Saturday.

Both Ighalo and striker partner Troy Deeney have been the subject of speculation regarding a transfer away from Vicarage Road during the January window, but manager Quique Sanchez Flores expects the duo to stay.

"It is important for the confidence of the players and I am happy because he [Ighalo] is scoring but I am not worried about what happens in the future," said Flores.

"Deeney and Ighalo are good players for this team, and for this project we need players of this level. I am sure these players will not be going in the middle of the season."

Nathan Ake completes a three-match suspension for the Hornets, following his dismissal in the home loss to Tottenham last month.

- The Hornets have won three of their last four trips to St. Mary's Stadium, netting exactly three goals in each of these victories.
- Watford have only made 18 changes overall to their starting XI from game to game this season; a league-low.
- Players from 19 different nations have made an appearance for Watford in the Premier League so far this season; a bigger spread than any other team (next most is Leicester with 16 nationalities used).
- Southampton are unbeaten in their last four league meetings with Watford (W2 D2).