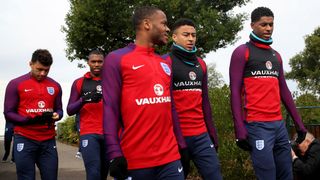 Raheem Sterling has received the backing of Gareth Southgate, who hopes the Manchester City man can harness his club form and propel England to the World Cup finals.

The Three Lions head into Thursday's clash with Slovenia knowing three points will assure them a place at Russia 2018.

Sterling endured a difficult time of it during the last international break, when he was substituted at half-time following a limp display against Malta which earned fierce criticism, before coming on for the final seven minutes against Slovakia.

But Southgate, who revealed former England winger John Barnes has previously spoken to the squad about reacting to adversity, believes Sterling – scorer of three goals in his last three club appearances – has the mentality to do exactly that, with the 22-year-old set to start in the number 10 role behind the in-form Harry Kane at Wembley.

"John came and spoke to us a few months ago," Southgate said. "We have some very exciting talent who want to go and express themselves, and we want to give them the framework to do that.

"Raheem comes into that bracket. He is a tough lad. That's one of the attributes I really like about him. He bounces back from disappointments and he goes again.

"I can see he is ready for tomorrow and looking forward to it. He is in a good moment with his club, he is working with a good coach there and we have huge belief in him as well.

"We want the crowd to be excited with what they're watching, and he's a player who can do that. He can beat people, his goalscoring record is improving, which is important for him, and he works hard for the team, chasing back and tackling.

"He's not just an old-fashioned winger. He's a [19]94 birthday, so he's not old at all, but he's at a moment where, like a lot of these guys, the next few years are very important to establish themselves as top players. He recognises that."