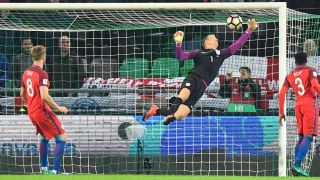 Gareth Southgate paid tribute to goalkeeper Joe Hart after his "outstanding" save earned England a point in Slovenia.

England toiled for long periods as they looked to add to their total of six points in 2018 World Cup qualifying, and settled for a goalless draw as their hosts were frustrated by the magnificent Hart.

The Torino keeper made a number of fine stops, with the pick of the bunch from Jasmin Kurtic's header, drawing Southgate's praise.

"[Hart has been] fantastic this week," he told ITV. "He is at his best when calm and composed – something he's aware of and something we've discussed.

"His attitude was excellent and his manner very calm. It was a brilliant, outstanding save – that got us the point."

And Southgate insisted it could prove to be a vital point when the campaign comes to a close, despite a poor performance in Ljubljana.

"I think the overall objective is to qualify," he said. "Long term, maybe that point will be important.

"Everyone can see we could be better. Most of their chances came from our mistakes.