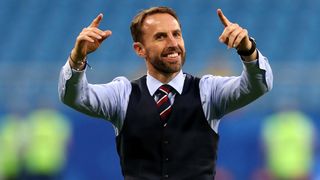 Gareth Southgate is proud of the way England fans have turned the Three Lions song into a source of renewed support after admitting he "couldn't listen to [it] for 20 years".

The nation has embraced the single by The Lightning Seeds, originally released for Euro 96, and turned it into a unifying way of celebrating their team's first appearance at a World Cup semi-final since 1990.

Fans have sung the lyrics from the stands in Russia, while the circulation of social media memes using the music has even led to the creation of the hashtag '#itscominghome'.

Southgate conceded the tune brings back painful memories from 22 years ago, when he missed the crucial penalty in England's semi-final defeat to Germany, and is happy to see it take on new meaning for a new generation.

Indeed, the former defender is thrilled to witness the country unite behind his side during a tumultuous political period, with Brexit causing uncertainty and division across much of England and Britain.

"I'm certainly proud of the support we're receiving. Our supporters have had a long time of suffering in terms of football. The enthusiasm they have for these players, they've been brilliant ambassadors for our country, it's great for them they've got some enjoyable moments playing for England now.

"Our country's been through some difficult moments in terms of unity and football has the power to do that. We can feel the energy and the support from home and it's a very special feeling for us."

England's run to the last four, where they will face Croatia, has come as a huge surprise given Southgate's relative lack of experience in management and the fact the team lost to Iceland in the last 16 of Euro 2016.

Southgate, though, says his side have not even begun to realise their potential.

"Sometimes, you have to go through difficult times and failures to learn and improve," he said.

"A lot of young players were involved two years ago, suffered huge disappointment, we could have ignored that and looked to the future but we felt it was important to unpick it and find out exactly why we've had 10 years since we won a knockout game.

"We're excited about the future but want to make the most of the opportunity we have [now]."