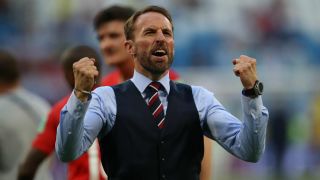 Gareth Southgate's waistcoat is the subject of a transfer bid from the Museum of London.

Southgate is becoming a national hero in England after leading the Three Lions to their first World Cup semi-final since 1990.

The England manager has also become a surprise fashion icon after sporting a fetching blue three-piece suit throughout the tournament.

Waistcoat sales have rocketed thanks to the Southgate effect according to retailer Marks & Spencer, the official suit supplier to the England team.

And now the Museum of London wants to bring Southgate's waistcoat home following the World Cup.

"Waistcoats were born in London in 1666, after being popularised by King Charles II," said senior curator Beatrice Behlen.

"In the following centuries England adopted the trend and a three-piece suit soon formed a key part of every man's wardrobe.

"Now Watford-born Gareth Southgate is continuing that London tradition and bringing waistcoats home to the forefront of fashion."

As World Cup fever boils over in England ahead of Wednesday's clash with Croatia, Yorkshire Tea have mocked up local landmark Malham Cove as Mount Rushmore, featuring World Cup stars Jordan Pickford, Harry Maguire, John Stones and Kyle Walker – the latter three having been born in the county.