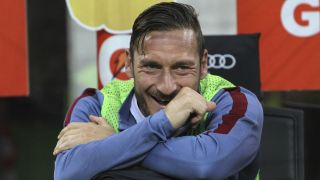 Totti, who turns 40 in September, agreed to a one-year contract extension last month after weeks of uncertainty over his future in the capital.

Roma president James Pallotta said the 2016-17 season would be the record goalscorer's last as a player, before he begins an as-yet unspecified role behind the scenes at the Stadio Olimpico.

Spalletti, however, has suggested the 2006 World Cup-winner can continue to play for as long as he wishes.

"Pallotta can say what he wants," he said. "But Totti will stop only when he himself decides to. In my opinion, that won't be this year, either.

"He will stop when he wants. I cannot decide and neither can you. You want Totti to stop playing this year, to destroy him psychologically, to take him on a tour of the pitches and museums.

"But if he continues to produce the same kind of statistics, he can still play."

Spalletti was speaking while midfielder Miralem Pjanic, who left Roma for Juventus for a reported €32million fee, was addressing the media in Turin for the first time.

The former Zenit boss conceded it will be tough to replace the 26-year-old but remains determined to challenge Juve for the Serie A title.

"Substituting Miralem will be difficult," he said. "He has quality with his feet and in his decision-making. However, our objective remains to compete with Juventus and all the top teams."