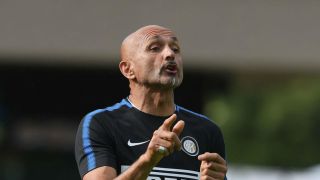 Inter are eager to atone for a poor showing last time out as they prepare to host Genoa in Serie A, insists Luciano Spalletti.

The Nerazzurri dropped points for the first time this season in midweek after they needed a 77th-minute Mauro Icardi penalty to salvage a 1-1 draw at Bologna.

Spalletti told a pre-match news conference that his squad have already shown a reaction in training, with midfielder Joao Mario not believing he was worthy of sitting out a training match.

"The players were the first to be unhappy with the last result and there's an automatic reaction and desire to give more," Spalletti said.

"These are the players we have for this season, we don't know what will happen after but I have faith in these players.

"Until the final day that I'm here, I will believe in them and I won't change how I think because of one match or a statistic.

"We perhaps need more creativity in the opponent's half but we still did well in the second half at Bologna despite the sense of anxiety as we knew we had to save the result.

"After Bologna, we played a training match with some of those who have played less. Joao Mario wanted to be part of it the day after because he wasn't happy with what he gave."

Victory on Sunday would move Inter to within two points of Serie A pacesetters Napoli and Juventus, who preserved their 100 per cent records on Saturday.