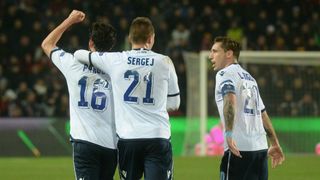 Lazio battled from a goal down to draw 1-1 at Sparta Prague in the first leg of their last-16 Europa League tie, with an away goal from Marco Parolo giving the Serie A side the edge.

Sparta took the lead after just 11 minutes when Martin Frydek smashed a rising drive into the top-left corner from 14 yards.

Antonio Candreva hit the crossbar with a stunning volley as the visitors looked the more likely side to go on and win the match, but Lazio will be content with a draw.

Stefano Pioli's men remain unbeaten away from home since November 29, although the last seven successive matches on the road have ended all square.

Sparta have never been beyond the quarter-finals of the competition and face an uphill battle in next week's second leg.

Lazio opened Sparta up in the fifth minute when Keita Balde Diao's backheel across the box set up Parolo, but his shot was blocked for a corner that Sergej Milinkovic-Savic glanced well wide.

A quick throw-in caught Lazio napping after 10 minutes and David Lafata flashed an effort wide of the post, but the striker made amends when he set up the opener.

Lafata fed Frydek, who took a touch before lashing an unstoppable half-volley across Federico Marchetti and into the top corner.

Marchetti saved a low shot after 36 minutes from Ladislav Krejci before Bicik palmed a Candreva volley over at the other end, but Lazio were not to be denied a leveller from the resulting corner.

Bicik could only parry Hoedt's header and Parolo smashed in the loose ball to equalise.

Candreva unleashed another fierce volley after 56 minutes that struck the crossbar with Bicik well beaten.

Both teams were struggling for cohesion in the final third and a long-range shot by substitute Mauricio that struck the corner flag summed up the lack of creativity on show.

Marchetti did well to hold onto a 25-yard low drive by Lukas Marecek after 77 minutes that was destined for the bottom-right corner, with Frydek following in waiting for a rebound.

With two minutes to go, Candreva, the liveliest player on the night, shot over from a narrow angle as the sides played out a draw.