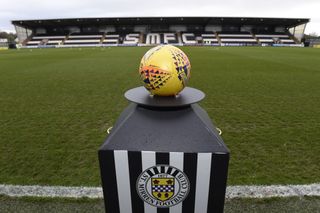 The Scottish league has launched an investigation after St Mirren’s latest positive Covid-19 test sparked the postponement of their clash with Motherwell.

Two players had already contracted the virus earlier this week with a third forced into self-isolation.

A further positive test saw more players instructed to go into self-isolation and the Paisley outfit told the Scottish Professional Football League that they could not fulfil their Premiership showdown with Well at the Simple Digital Arena.

A league statement read: “St Mirren have informed the SPFL that, due to a number of positive tests for Covid-19 amongst their playing squad and coaching staff, they have only 12 registered fit players, including four goalkeepers, available for today’s game against Motherwell – and that, as a result, St Mirren are unable to fulfil today’s fixture.

“As a result, and in line with standard procedure, the SPFL have postponed the fixture pending an investigation into the events at St Mirren.”

The postponement, which was announced two-and-a-half hours before the scheduled kick-off, is the second late call-off to hit Motherwell in successive fixtures.

The Lanarkshire side saw their game against Kilmarnock postponed on October 2 after the entire Rugby Park first-team squad were ordered to self-isolate following six positive tests.

This afternoon’s Scottish Premiership match between @saintmirrenfc and @MotherwellFC has been postponed after St Mirren informed the SPFL that they could not fulfil the fixture.— SPFL (@spfl) October 17, 2020

An SPFL investigation into those circumstances is ongoing with no rearranged date being announced until the process is complete.

Killie subsequently forfeited a Betfred Cup tie against Falkirk, and Forfar were also forced to concede a cup tie against Dundee after a positive test, but league rules are less clear-cut.

The Paisley club said in a statement: “St Mirren FC can confirm that a further first-team player has returned a positive Covid-19 test and is now self-isolating.

“In line with Public Health and Scottish Government guidelines, a number of additional players are now required to self-isolate.”

Saints chief executive Tony Fitzpatrick added: “It is very disappointing that we are faced with this situation despite the numerous precautions and safeguards that are in place within the club.

“As a result we regret this has caused our game against Motherwell to be postponed.

“This is hugely frustrating for our fans, the players and staff, and for everyone connected with the club. We will be working with the SPFL and relevant health authorities on this matter and will provide an appropriate update when more information is available.

“This once again underlines the absolute necessity of maintaining vigilance to ensure that players, officials and their families minimise the risk of infection to keep everyone safe.”

St Mirren are due to host Hamilton on October 24 and then have a free weekend.