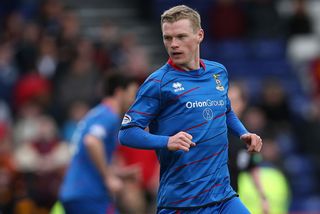 Both sides are now winless in five league games, leaving the duo tied on 34 points, nine adrift of third-placed Motherwell.

Billy McKay opened the scoring for the hosts in the fifth minute at the Tulloch Caledonian Stadium, the striker latching onto a Gary Warren knockdown to volley home his 15th league goal of the season

However, they were unable to hold onto three points as Keith Watson levelled five minutes later for United with a header from a corner.

Inverness dominated the early stages of the second half and had a chance to take the lead in the 62nd minute when Graeme Shinnie was brought down in the penalty, but Nick Ross' penalty was well saved by Radoslaw Cierzniak.