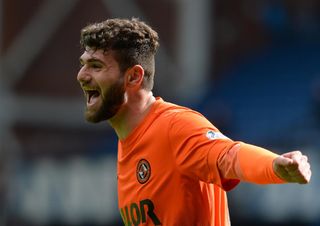 Motherwell would have confirmed at least a third-placed finish - which guarantees a UEFA Europa League spot - with victory on Saturday, but Stuart McCall's men fluffed their lines.

United, who may yet seal a place in Europe by winning the Scottish Cup final against St Johnstone next month, opened the scoring in the eighth minute when Nadir Ciftci finished off a flowing move with an angled shot into the top-right corner of the net.

Ciftci was a constant menace and he grabbed a second five minutes before the break, finishing off a swift counter-attack from eight yards.

The game was put beyond all doubt in on the hour-mark, when Stuart Armstrong showed a fine turn of pace to break free and finish into the roof of the net, before Ryan Dow and Brian Graham added further gloss to the scoreline.

Lionel Ainsworth grabbed a consolation for Motherwell in the closing stages, but it was too little, too late for the visitors - who are now four points ahead of United with three games remaining..

Aberdeen remain second, but missed the chance to widen the gap between themselves and Motherwell after being held 1-1 by St Johnstone at Pittodrie.

Stevie May put the visitors ahead in just the eighth minute, but Aberdeen ensured a share of the spoils when Adam Rooney levelled shortly after the half-hour mark.

The point may yet prove crucial, as Aberdeen are now eight points clear of Dundee United heading into the final three matches.

In the other game to be played on Saturday, Ross County moved up to ninth as Filip Kiss' strike and Richard Brittain's penalty sealed a 2-1 triumph at home to Kilmarnock, who gave themselves a glimmer of hope when Kris Boyd scored two minutes from time, but were unable to snatch a point.