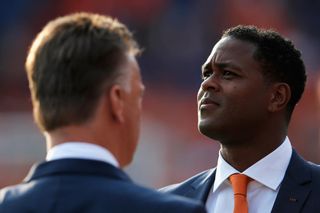 County parted company with Derek Adams and his father George, the club's director of football, on Thursday but suffered a 4-0 loss at high-flying Hamilton.

Reports in the Scottish media have linked former Netherlands international Patrick Kulivert - who was assistant to Louis van Gaal at the World Cup in Brazil - with the vacancy, but whoever Adams' successor is has a huge job on their hands to reverse a run of five consecutive league losses.

Under the guidance of coach Steve Ferguson and captain Richie Brittain, County were more than a match for their hosts before the break, but a second-half capitulation exposed some familiar flaws.

Martin Canning headed in the opener two minutes after the interval and Mickael Antoine-Curier scored two penalties, with Uros Celcer given his marching orders for conceding the second.

Brittain then missed a spot-kick and Jason Scotland added the fourth to keep Hamilton in second place and compound County's misery.

Inverness Caledonian Thistle remain top of the pile courtesy of a 2-0 win over Kilmarnock, Aaron Doran and Greg Tansey netting second-half goals for the leaders.

John Hughes' men are still unbeaten in the league and sit seven points clear of Celtic - who they beat last Saturday - though the champions have two games in hand.

Dundee United round off the top three following a 3-0 win at St Mirren, who remain Ross County on no points.

Elsewhere, loanee Brian Graham scored on his St Johnstone debut in a 1-0 win over Motherwell, and Aberdeen beat Partick Thistle 2-0.

Celtic travel to Dundee on Sunday as Ronny Deila's side seek to put their failure to qualify for the UEFA Champions League group stages behind them.