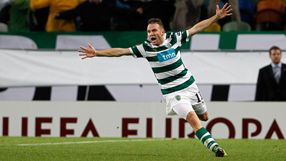 Bilbao struggled to reproduce the inspired form that helped them to beat Manchester United and Schalke 04 in previous rounds and they will need to improve in next week's second leg if they want to reach the Bucharest final in May.

Jon Aurtenetxe grabbed the breakthrough for the visitors in the 54th minute, easily tapping the ball in after Sporting's Insua failed to clear Markel Susaeta's free-kick.

But Sporting, unbeaten in 11 European home games, kept on believing and Argentine Insua made up for his mistake 20 minutes later, levelling with an exquisite header before Capel rifled in the winner with a left-footed shot.

"We turned around the result against a big team with a great performance as we were unlucky to concede the first goal," Sporting coach Ricardo Sa Pinto said in a television interview.

The Portuguese team dominated the first half and striker Ricky Van Wolfswinkel squandered a golden chance to put them ahead in the ninth minute as his shot flew inches wide.

In the second half the Basques grabbed the away goal against the run of play and Llorente should have added a second five minutes later but hit the post as Sporting went on to produce a memorable comeback.