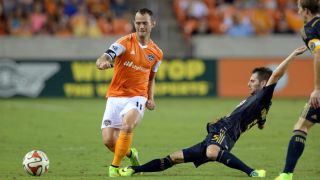 Davis, who was a member of the U.S. squad at the 2014 World Cup, has spent most of his career with the Dynamo, having broken in with MetroStars as the third overall pick in the 2002 MLS SuperDraft, before being dealt to Dallas a year later. He joined the Earthquakes in 2005, and remained with the franchise when it moved to Houston.

The midfielder is the Dynamo’s career leader in games, assists, starts and minutes. He also is a six-time MLS All-Star.

Houston picks up Sporting KC’s second-round pick in the 2017 SuperDraft and its third-round pick in 2018. Per MLS policy, additional terms were not disclosed.

The Dynamo said Davis, a native of Missouri and alumnus of Saint Louis University, requested a move closer to his home as his career winds down.

Thank you @Brad_Davis11 for 10 years of memories and service to the Dynamo and Houston community! #ForeverOrange pic.twitter.com/bGbjrz9EQv

“Brad recently approached us about the opportunity to return home to finish his career, and given his monumental contributions to the Dynamo over the years both on the field and in the community, we agreed to try and fulfill his wishes this off-season,” Dynamo president Chris Canetti said in a news release. “With this trade in place, we are able to honor that request and do what is in the best interests of him and his family. It was a difficult move, but we believed it was the right thing to do.

"Brad’s legacy is firmly cemented in Dynamo history, no matter where he is or how much time passes. We wish him, his wife Heather, and his three kids all the best in the future.”

Davis acknowledged the request in a statement published on the Dynamo website.

“At this point in my career it is time for a change, a new challenge,” Davis said. “The opportunity came about to be closer to home and it has always been a dream to play professionally in front of my family. This decision was not an easy one, but one I needed to make. At the end of the day, it was mutually agreed upon by the staff and me and I cannot thank them enough for their support. I would like to say thank you to all the fans that welcomed my family to Houston and for all the support over the years. A huge part of me will always be Forever Orange.”

Davis is the second veteran winger added by Sporting KC this offseason, after the signing of Justin Mapp as a free agent.