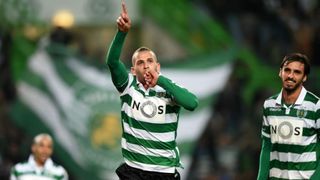 Islam Slimani scored a double as Sporting Lisbon dealt Porto their first league loss in nearly a year to return to the top of the Primeira Liga with a 2-0 win on Saturday.

Porto had gone top of the table last month with a 3-1 victory against Academica as Sporting slipped up, losing 1-0 at Uniao Madeira.

Julen Lopetegui's men approached the contest at Estadio Jose Alvalade having not lost in the league in 341 days but were undone by Algeria striker Slimani.

Slimani rose highest to head home the opener from a free-kick in the 27th minute.

And he made sure of the points five minutes from time by latching on to Bryan Ruiz's throughball and confidently slotting beyond Iker Casillas.

Sporting now lead Porto by two points in their bid for a first Primeira Liga title since 2002, Benfica are two points further back in third place.