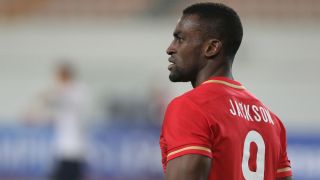 The Chinese Super League has burst onto the global conscience after the country's transfer record was broken four times in the space of a fortnight which saw the Far East threaten to match European football's considerable muscle.

CSL clubs outspent those from any league in the world in the early weeks of 2016, culminating in the record-breaking €50million transfer of Shakhtar Donetsk attacker Alex Teixeira to Jiangsu Suning.

Elkeson's move from Guangzhou Evergrande to Shanghai SIPG, Jiangsu Suning signing Chelsea's Ramires and Jackson Martinez arriving in Guangzhou as Elkeson's replacement had all set the record before Teixeira was signed, despite interest from Premier League giants Liverpool.

But the sight of big names arriving in China is nothing new.

Australian striker Joel Griffiths spent four and a half years in the CSL, starting in 2009 with Beijing Guoan where he won a league title and scored 34 goals in 101 league appearances, before moving to Shanghai Shenhua in 2012 alongside Drogba and Anelka.

"That was one of things that made me sign [at Shanghai]," Griffiths told Omnisport.

"To play with those guys and try to help them because I was in China before that, I was pretty much their interpreter and trying to get in their ear and tell them about the culture and where to go, it was a rollercoaster season.

"I couldn't always play or train with them all the time, which was frustrating, but I wouldn't change it for the world.

"It was a once-in-a-lifetime opportunity."

Suddenly backed by the Chinese government, who want to put the country at the forefront of the global game, CSL clubs are now able to spend to get the players they want, as opposed to waiting for big names to sign on free transfers in the twilight of their careers.

In that way, the January transfer window was significant. It was the first time Chinese clubs have truly impacted the European market.

But for those who have already played in China, this was no surprise.

"When I got there you could just see it was starting to pick up. There was a lot of interest," Griffiths said.

"The crowds were up, TV audiences were up … and as you can see now the silly money being floated around now is ridiculous. It's crazy money, but they're really ambitious and they know where they want to be.

"They'll do anything to be at the top and make people talk about Chinese football."

But Griffiths said the new wave of stars arriving in China should expect some tough times.

The Australian had his own difficulties adapting to life in China initially, but said living and playing in big cities was important.

"When I first got there, I was thinking, 'what have I done?' … You get homesick, so it can be a bit tough because you're not sure where to go and don't speak the language," he said.

"There's a lot of things constantly on your mind, but obviously Beijing was a really good city and all of a sudden you're settled and not thinking about home or other things, you've got your life there and you've started a new life and adventure.

"It depends on the city. [Australia international] Matthew Spiranovic is in Huangzhou and that's a terrible city. I can't expect him to stay there long.

"If you're not in Beijing, Shanghai or Guangzhou, really, in terms of having a life outside of football, you won't have one. It's as simple as that.

"If you go to a team outside of those big cities, you basically have to look at your bank balance to be happy."

However, in China, even cities can pop up almost overnight.

"I've seen cities transform into mega-cities. Guangzhou 10 years ago was very non-international so to speak, they were set in their ways, small club, no one spoke English, but now they have an international airport and a lot of ex-pats because there's a lot of trade through that area," Griffiths said.

Lawrie McKinna, a Scotland-born Australian coach who spent the better part of a season with the Chengdu Blades in 2011 prior to their relegation from the CSL, said that it was becoming easier to tempt players to China.

"I would say when the big coaches come in they bring in their full staff, and that's the big thing," McKinna told Omnisport.

"Local staff are always trying to knock you off. They're nice to your face but behind the scenes you always knew something was going on.

"[Western coaches and western staff] definitely helps [bringing big players to the CSL], as does the finance, obviously."