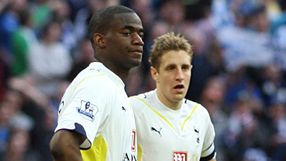 Spurs may have to field Cameroon centre-back Sebastien Bassong alongside captain and England defender Michael Dawson for Saturday's Premier League match at Wigan Athletic and the mouthwatering clash with Jose Mourinho's Real on Tuesday.

"We think Ledley might have to have another operation. If he does he will probably be out for the rest of the season," manager Harry Redknapp told Thursday's London Evening Standard.

"It's an absolute nightmare. It means we are down to two centre-halves. We have known for a little while that he was struggling with it. He has had problems with his knee for a long time but that doesn't seem too bad - it's just his groin."

Woodgate limped out of a midweek friendly against a Barnet XI with a calf problem although midfielder Tom Huddlestone, who can play in central defence, returned to action in that match after a long-term absence following an ankle operation.

Redknapp is also hoping Gareth Bale will be fit for the trip to Madrid after pulling out of the Wales squad for Saturday's Euro 2012 qualifier against England with a hamstring problem.

Redknapp added that winger Aaron Lennon, who withdrew from England's friendly against Ghana on Tuesday as a precaution because of a tight hamstring, should be fit for the Wigan game after returning to training on Thursday.

"Aaron is OK. He trained this morning. There isn't any problem with him," said Redknapp. "He met up with England and stayed with them for 10 days, felt his hamstring was tight and we didn't want to risk him going so he pulled out of the squad."