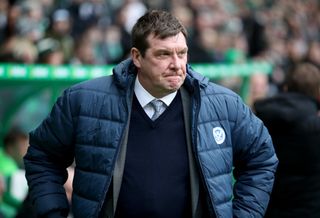 The Perth side looked on course to claim three vital points after a dominant second-half display before a spectacular stoppage-time strike from Sean Clare snatched a 3-3 draw for Hearts.

The point eased the Tynecastle club ahead of basement side Hamilton on goal difference.

However, Wright was adamant the officials should not have awarded Hearts the throw-in which paved the way to Clare’s 25-yard equaliser.

“It was a poor decision,” he said. “It was our throw-in and the fourth official is right in front of it and he clearly says: ‘Blue, blue’.

“I have watched it back and the ref isn’t even in a position to give it but he overruled him.

“Why he isn’t listening to his fourth official I don’t know. You can bring VAR into Scotland all you want but it wouldn’t have worked because the ref didn’t listen.

“You can say we should have dealt with it and that’s right, but it’s beyond comprehension that can happen.

“We totally battered them in the second half.”

Stevie May fired Saints in front but Hearts fought back to take a half-time lead thanks to recent recruit Liam Boyce, with his second goal in the space of six days, and Steven Naismith.

Ali McCann then pulled the home side level early in the second half before May’s second once more gave Saints the advantage, until Clare’s late blow.

Hearts boss Daniel Stendel admitted he was bewildered by his team’s lapse after going in ahead at the interval.

“I will need some time to understand what happened in the second half,” he said.

“I thought in the first half we were in control and even when St Johnstone scored I felt we controlled the game.

“In the second half we played a different game and it was like we had different players on the pitch. We lost our ideas.

“At half-time I didn’t think I would be saying I’d be happy with a point but when you see the second half I am.”