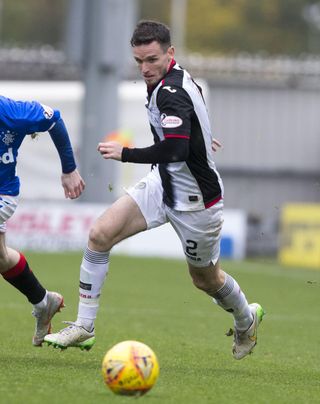 Paul McGinn was glad to keep a third successive relegation off his CV after St Mirren retained their Ladbrokes Premiership status against Dundee United on Sunday.

The 28-year-old Buddies defender was relegated with Chesterfield in 2017 then Partick Thistle last year and faced dropping to the Championship next season ahead of the play-off against the Taysiders.

The second leg at the Simple Digital Arena was finely balanced after the goalless draw at Tannadice last Thursday night but it was advantage United when Nicky Clark scored from the spot in the 23rd minute only for Saints forward Danny Mullen to level three minutes later with a well-taken volley.

The match ended 1-1 after 120 minutes before St Mirren goalkeeper Vaclav Hladky became the hero with three saves in the penalty shoot-out to help the home side to a 2-0 win.

It was a relief for McGinn, who scored the first penalty for St Mirren.

“It is hard to keep picking yourself up and keep battling,” he told Saints TV.

“With Chesterfield, we were mid-table, I got injured and I was out for five months and when I came back and we were bottom.

“It was like, ‘why is football doing this to you?’ sort of thing.

“Then I went to Partick who had done so well the year before and they were in pieces.

“It is one of those things, not everyone can win everything so it is just good to be on the right end of it for a change.

“It is a massive relief more than anything else. Just to get it over the line was unbelievable.”

McGinn, who won the club’s player of the year award on Friday after returning last summer for a second spell with the Paisley outfit, revealed he was too tired to think about the importance of his spot kick.

The former Queen’s Park, Dumbarton and Dundee full-back said: “I was just so tired. Normally you are nervous but I was thinking, ‘I am so tired here, I am going to score this, that’s it.’

“It was quite emotional. It has been a season of two halves. We were just in a mess in the first half of the season and to come back means so much.”

St Mirren’s stadium was sold out for the first time in 10 years and boss Oran Kearney praised the backing of the Buddies’ fans.

He said: “It was rocking and it has been rocking for the last three or four months and the last couple of months in particular. The fans have been brilliant.

“Even in some of the tense games in the bottom six, they didn’t let the tensions seep out on to the pitch. It is so important that doesn’t happen.

“It allows players to play with a huge amount of freedom and they are a massive part of us being a Premiership club.”