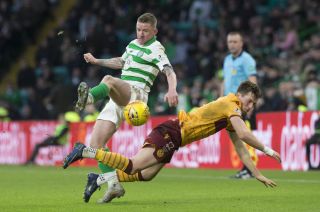 Motherwell manager Stephen Robinson felt Christopher Long’s team-mates pulled the striker “out of the mire” following his first-half red card in a goalless draw at Hamilton.

Long was booked twice in six minutes – firstly for kicking the ball away after conceding a free-kick and then for catching David Templeton with his studs in the 37th minute at the Foys Stadium.

Mark O’Hara’s free-kick found Declan Gallagher unmarked but the defender’s touch let him down, Liam Polworth was played through but could not beat Luke Southwood, and substitute Jermaine Hylton volleyed just over in stoppage-time.

In the end Robinson felt it was a good point, especially after Aberdeen’s home defeat by Ross County allowed Motherwell to climb back into third place in the Ladbrokes Premiership with a game in hand against St Mirren on Tuesday.

He said: “I thought we should have had all three. We went positive when we went down to 10 men and put two up top, went 4-3-2, and I thought the boys’ discipline was excellent. We reduced them to literally nothing, I don’t think Mark (Gillespie) had a save to make.

“So it has to be credit to the boys. We are back in third place with a chance to go four points clear, so a really, really good performance. The players have pulled Chris Long out of the mire.

“It was definitely a red card. I’m really disappointed but I’m going to concentrate on the boys who were very, very good for me. They dug in and should have had three points in the end.”

Hamilton head coach Brian Rice was frustrated his team did not do more with their possession.

Their best chance came in the third minute when Marios Ogkmpoe was played clean through but Gillespie blocked with his foot.

“Two points dropped,” Rice said. “I felt we were the better team, even with 11 against 11. With 11 against 10 we had loads of possession and got into some good areas but the final ball wasn’t there, especially from wide areas. Our crossing was pretty poor.

“On saying that, David Templeton had five or six shots at goal and normally David would score with at least one of them. So I’m frustrated with that. He had a few blocked and a few over the bar.”