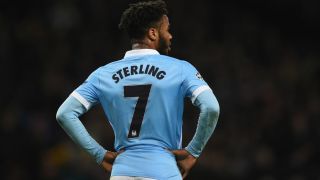 Manchester City cannot worry about what their title rivals are doing, according to Raheem Sterling.

City are looking to secure a third Premier League crown in five seasons.

Manuel Pellegrini's side are third in the league after 20 games, three points behind league-leaders Arsenal.

Sterling said the side just need to focus on themselves rather than the clubs around them in the table.

"We just need to focus on what we need to do to win the Premier League and not worry about other teams and what they’re doing," he told the club's website.

"That way, we don’t let anything affect our thinking and purely focus on our own performance.

"We’ve played a lot of away games over the past fortnight so we’re looking forward to playing in front of our own fans again on Wednesday."

City played Everton in their League Cup semi-final first leg last week, and face the Merseyside club in the league on Wednesday.

"I’ve never come up against the same team as often as this and it is a pretty quick turnaround," Sterling added.

"But I didn’t play in the semi-final first leg last week so I obviously hope to be involved this time."