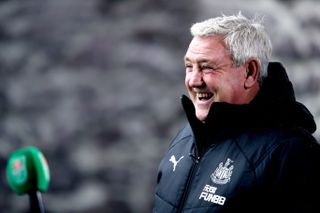 Steve Bruce has described as “insulting” any suggestion he is a “lucky” manager.

The 59-year-old head coach and his players have enjoyed more than their fair share of good fortune in the last week with a spectacularly controversial penalty earning them a fortuitous Premier League draw at Tottenham on Sunday before Jonjo Shelvey’s late strike set up a shoot-out victory over League Two Newport in the Carabao Cup.

Bruce, whose reward was a trip to Sky Bet Championship Brentford in the quarter-finals, has since found himself at the centre of fresh criticism over his misfiring team’s style of play and effectiveness as a result.

However, he launched a passionate defence as he prepared for Saturday evening’s league clash with Burnley.

He said: “So I’ve been lucky for 20 years, have I? We had a little luck in the draw last night – we could have drawn Manchester City, like we did last year. Is that luck?

“Well, I suppose it’s better to be a lucky manager than a good one.

“I understand we haven’t played well enough. For goodness sake, let’s have a bit of balance on it. If we win against Burnley we might go into the top six.

“I’ve been going 20-odd years, I look at the clubs I’ve managed and they were in a far healthier state than they are now – Sunderland, Hull, Birmingham – whatever you want to say.

“To say now that I’m lucky, I just find that a little insulting.”

Bruce admits he does not know how long it will take him to change a side which under predecessor Rafael Benitez and in his first season, played with five at the back and defended deep into one which operates on the front foot.

“But every time we have a poor performance or we get beat, there his a raging debate and that is what I’m asking, for it to be a little bit more balanced.”