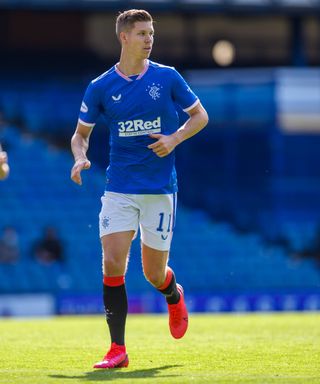 Cedric Itten’s Rangers debut was low-key but Steven Gerrard is convinced his new striker can play a starring role at Ibrox.

The Colombian had just rediscovered his scoring touch to grab his first two league goals of 2020 but Itten was denied the same service as Rangers cruised through the final stages.

However, Gerrard is convinced Itten will be a key addition in the months to come.

Speaking after his side moved joint top of the table with their second win of the new season, he said: “Cedric came into the game when it was won. I think we were managing the game then, keeping the ball and not forcing the issue.

“But from what I’ve seen in the opening two or three training sessions, I think he’s going to be a big player for us.

“But there are loads of appearances for him here if he works hard and earns them, he can be a big player for us.”

Saints struggled to get out of their own half at times but will have to recharge their batteries quickly with Celtic visiting Paisley on Wednesday night.

Boss Jim Goodwin – who saw the Buddies fall behind to a Conor McCarthy own goal before Morelos added his second-half double – said: “It is definitely not easier (coming to Ibrox with no fans). I hated coming here as a player – and I don’t just mean here, Ibrox and Parkhead.

“Coming to the Old Firm is really difficult. They are long afternoons, you know you won’t have a great deal of possession and you know that when you get those one or two chances you have to be clinical. We did not do any of that today unfortunately.

“The goals are poor albeit Rangers thoroughly deserved their victory.”