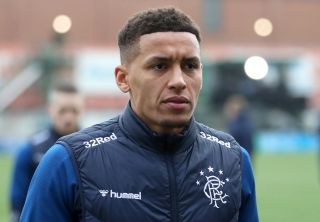 The right-back now only faces two weeks on the sidelines after being rushed to hospital for an operation on his appendix.

The Englishman – who has sat out just two of Gers’ 37 games so far – will be missing as the Ibrox men kick-off their William Hill Scottish Cup campaign at home to Stranraer on Friday night.

And he is likely to be absent for both next week’s Ladbrokes Premiership showdowns with St Mirren and Hearts.

But the captain will be back in time to lead out his team during Rangers’ gruelling February schedule – which involves seven games on the domestic and European fronts – after medic Waller spotted the danger signs after Tavernier reported stomach pains earlier this week.

Gerrard said: “We had a problem yesterday with Tav. I know there were some rumours circulating that he was going to be out for six weeks to a month – they aren’t true.

“He was totally fine in Dubai. He flew back, had a day off but then on the morning we were due to come in he felt a bit of abdominal pain. He wasn’t sure what it was so called the doctor.

“Thankfully we’ve got one of the best docs in the business who sent him to a specialist straight away and we got to the problem pretty early.

“He will probably be out for a couple of weeks all being well. He’s had a minor procedure around his appendix that we sorted out yesterday. But it went really well.

“These situations can be worse. I think they can be up to six weeks or a couple of months if there is complications or the appendix bursts. But that wasn’t the case.

“We’ve managed to get to the situation really early. When you get the right person and he sorts it out, then it’s looking more a couple of weeks rather than a couple of months, which is good news.

“In saying that, no-one wants to lose their captain for one game, never mind a couple.”

Gerrard has seen his casualty list grow in the last few days, however.

Greg Stewart is also a doubt for the Ibrox cup tie with Stevie Farrell’s League One minnows with a calf knock, while Filip Helander still faces another month out of action with his foot injury.

Top scorer Alfredo Morelos is banned for the game, while Glenn Middleton has picked up a foot injury in a reserve clash earlier this week.

And Gerrard admits that could throw a spanner in the works for the youngster as he seeks another loan move following his stint at Hibernian earlier this campaign.

The Ibrox boss does, however, expect the pace of his squad clear-out to step up this week after axing Eros Grezda and Andy King.

Greg Docherty is set to join Sunderland on loan in the coming days, while Burton Albion hope to take Jamie Murphy for the rest of the season.

He said: “There was a few things bubbling away with Glenn so (his injury) may or may not put the people we were in contact with off.

“But we don’t predict he will be missing for too long, so hopefully not.

Understand @Gregdocherty96 would prefer loan to Sunderland if he's to leave Rangers this month. Midfielder still feels he has future at Ibrox and reckons Black Cats offer best chance for him to prove himself to Steven Gerrard. Charlton have also registered an interest— Andy Newport (@AndyNewportPA) January 15, 2020

“There is a real serious club in for Docherty. Negotiations are ongoing but it’s getting closer and closer.

“Greg is a player we respect very much because he’s given it his maximum effort to push the guys in the starting XI to get a place but unfortunately it hasn’t happened.

“The best thing for him at this stage in his career is to go play and we’ll analyse it again at the end of the season.

“With Jamie, it’s a similar situation but perhaps not as close as Doc’s. I predict they should go out in a couple of days for their sake so they can get playing as quick as possible.”