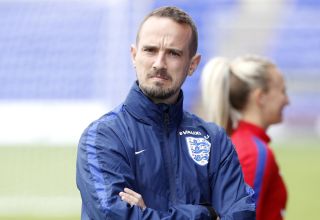 Mark Sampson can “concentrate fully on his future” after a charge that he used racist language in a team meeting was found not proven, his chairman at Stevenage Phil Wallace has said.

Sampson, who is first-team coach at the Sky Bet League Two club, was charged with misconduct by the Football Association in November last year. It was alleged that during a team meeting on September 2 to discuss player recruitment the former England Women coach had said “a black Nigerian centre-back, you can’t rely on them”.

An independent regulatory commission stated it did not find the evidence presented by either side in the case to be compelling and commented in its written reasons: “The evidence was not of a kind to enable the commission to be satisfied to the requisite standard of proof that the words had in fact been spoken.”

Stevenage chairman Wallace welcomed the ‘not proven’ outcome and said in a statement: “I am delighted that Mark is now able to concentrate fully on his future and not be troubled by allegations made by former manager Dino Maamria and former coach Ali Uzunhasanoglu after they had been dismissed.

“The club have stood shoulder to shoulder with Mark because the evidence presented by those independents present at the time conflicted with the allegation.”

The matter was reported to the FA on September 11 by former Stevenage goalkeeping coach Uzunhasanoglu. It came two days after he had been told by Sampson, who had been placed in caretaker charge of the first team following the sacking of Maamria, that his services were no longer required at the club.

Maamria supported Uzunhasanoglu’s version of events, with Sampson denying he had made the remark. Analyst Robert Smith and fitness coach Jon Ashton, who were also present in the meeting, said they had no recollection of hearing it.

The independent commission said that omissions of key pieces of information from original statements given by Maamria and Uzunhasanoglu, and the manner in which their evidence was given, “cast a shadow” over the evidence given and “raised concerns over the reliability of their accounts”.

However, it also wrote that it did not find Sampson’s evidence “compelling” and was left “unable to conclude that Mr Sampson had provided a version of events that was sufficiently reliable upon which to confidently and correctly base a conclusion as to the origin of the truth”.

It added: “This was not a case where it could sensibly be said that a witness had somehow been mistaken about what had, or had not, been said at the relevant time.

“Put simply, some of those giving evidence had lied. It is clear that misplaced loyalty and a willingness to be untruthful was an inescapable part of this case. Collusion of evidence, one way or another, was unattractively at play in this case.”