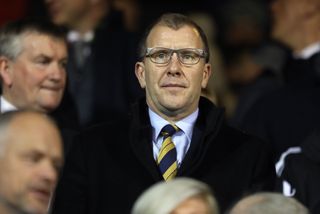 Former Scottish Football Association chief executive Stewart Regan claims cross-border competitions should be the focus after the game found itself in a “dreadful position” dealing with the impact of the coronavirus pandemic.

Regan believes the governance model is all wrong in Scotland and the only way to move on from the furore surrounding the relegation of Hearts, Partick Thistle and Stranraer and the failed attempts at reconstruction, which generally require 11 of top-flight clubs to approve, is to look outside Scotland.

Hearts and Thistle are teaming up to challenge their relegations in a court battle with the Scottish Professional Football League and Regan believes the only way ahead for the game is to be innovative.

Speaking on the BBC Scottish Football Podcast, Regan said: “I said several weeks ago that cancelling the season wasn’t the best road to take because it would create animosity between clubs and it would lead to potential legal challenges, and that’s essentially where we are now.

“Scottish football is in a dreadful position. Falling out, animosity, legal challenges – all these things are just not where the league needs to be ahead of the start of a new season, a new TV contract.

“At the heart of it is money and also fear, and therefore self-interest. When you put all of those things together, it’s a very powerful recipe. Clubs will vote for what is best for them, not what’s best for Scottish football.

“From the SPFL’s position, they simply paint the picture that this is a democracy, if the clubs want to go one way, so be it. The governance model protects the status quo.

“If the clubs want to change anything, the first thing that has to happen is that the governance model has to be changed. But we know that will be a really difficult job because it’s turkeys voting for Christmas.”

Regan, who spent almost eight years at Hampden before leaving in the wake of a failed bid to secure Michael O’Neill as Scotland manager, added: “I was reading an article from last year from FIFA president Gianni Infantino who said FIFA might not be negative towards cross-border competition in the future because of the lack of competitive balance across the world right now.

“There has never been a better time to start talking about giving clubs an opportunity to move up the pyramid in a kind of cross-border format.

“For me that’s the kind of innovative thought processes Scottish football needs to be having rather than sitting around licking its wounds over what’s happened in the last few weeks.

“If I was still there now, I would get a planning committee together and get terms of reference written for that project.

“If we do nothing, Scottish football is going down the pan. Lack of relationships, lack of sponsorship, lack of interest – it’s really going to struggle unless it picks itself up and puts a plan together.

“We should try and look outside of the Scottish league. I know other countries are already looking at this as well.”