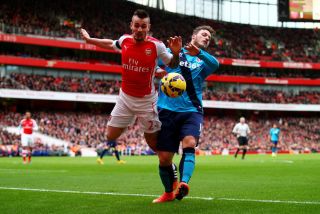 Arsenal full-back Debuchy was stretchered off after just 13 minutes of his side's comfortable 3-0 win over Stoke at the Emirates Stadium on Sunday.

The France international was sent crashing into the advertising hoardings when Stoke forward Arnautovic nudged him in the back as he shepherded the ball out for goal kick.

Arsenal manager Arsene Wenger confirmed after the game that Debuchy needs to see a specialist and is set for a prolonged period on the sidelines.

Arnautovic's actions went unpunished by referee Jonathan Moss, and Hughes was quick to absolve the Austrian of any blame.

"There was no malice, I don't think," the Welshman told his post-match media conference.

"Those situations arise time and time again in games and there are no consequences. I don't think there was any intent to hurt him."

Stoke were outplayed from the first whistle to last in north London, with Laurent Koscielny's headed goal after just six minutes signalling Arsenal's intent to avenge their 3-2 loss at the Britannia Stadium last month.

Alexis Sanchez was, yet again, at the forefront of Arsenal's best attacking play, with his pinpoint cross setting up Koscielny's opener before the Chilean added a superb brace of his own with goals either side of half-time.

Hughes admitted his side were well beaten at the Emirates, and was full of praise for Sanchez's virtuoso display.

"We were second best today to a good Arsenal side that has the benefit of a good start," he added.

"We never had a period in the game when we could dictate and they were really comfortable, which was a disappointment.

"When you see the power [Sanchez has] got and the pace, he's an outstanding player.

"I find South American players have passion and drive. He's a world star, but he's put a shift in for the team."