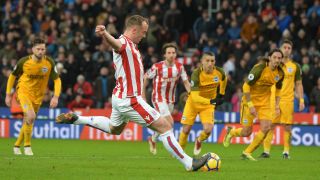 Mat Ryan made a stunning last-gasp penalty save from Charlie Adam as Stoke City missed the chance to move out of the Premier League bottom three in a pulsating 1-1 draw against Brighton and Hove Albion.

Jese Rodriguez was pushed in the area by Dale Stephens in the 88th minute at the bet365 Stadium and reacted angrily after not being allowed to take the spot-kick.

And the forward's mood will hardly have improved when Ryan flung himself to his right to keep out Adam's effort from 12 yards, Lewis Dunk pulling off a superb tackle to prevent the Scot tapping in the rebound.

Incredibly, substitute Anthony Knockaert then came to Brighton's rescue by clearing Mame Biram Diouf's header off the line from Adam's corner in a frantic ending.

The dramatic conclusion came after Jose Izquierdo – a scorer in the reverse fixture that finished 2-2 – had given Brighton a first-half lead with a goal that would not have looked out of place had Barcelona scored it.

Xherdan Shaqiri levelled in the second half with a brilliantly precise finish, but Adam's failure to make the most of Stoke's late opportunity means they stay 18th, with Brighton three points above.

FT: Late drama at the bet365 Stadium sees the points shared after Charlie Adam misses from the spot in the dying stages (1-1) February 10, 2018

Izquierdo served notice of his threat in just the second minute with a fine bending effort towards the top-right corner that Jack Butland did well to parry one-handed.

But Stoke could do little about the tricky winger's brilliant opener as Izquierdo played one-twos with Solly March and Stephens, before coolly slotting past Butland into the bottom-right corner.

Badou Ndiaye fizzed a 15-yard volley wide as Stoke sought an immediate response, but the visitors – who had switched to two up front with the introduction of Saido Berahino at the break – were fortunate not to be 2-0 down having failed to capitalise on a bright start to the half.

Pascal Gross had ample time to pick out a cross from the left and the onrushing Davy Propper headed over the top from the centre of the area.

And Stoke made the most of the reprieve with a textbook finish from Shaqiri. Brighton failed to get close enough to the Switzerland winger, whose precise effort found the bottom-left corner with Stoke's first shot on target.

Referee Bobby Madley was then uninterested when Shaqiri went to ground in a challenge with Gaetan Bong. That was the precursor to a stunning ending that started when Jese was felled by Stephens.

The on-loan Paris Saint-Germain forward, making his first Stoke appearance since December, had to be led away after being left furious at not being allowed to take the penalty, and Ryan made a fine stop from Adam before the midfielder was then denied by Dunk's excellent tackle.

Agonisingly for Stoke, Diouf's powerful header was goalbound but Knockaert did just enough to head off the line and preserve a point for the Seagulls.

- Stoke are unbeaten in their last 17 home games against Brighton in all competitions (W9 D8 L0), since losing 1-0 in a second tier match in September 1961.
- The Potters have missed their last three penalties in the Premier League, with each taken by a different player – Charlie Adam, Saido Berahino and Marko Arnautovic.
- Xherdan Shaqiri has scored in back-to-back Premier League games for the first time in his career.
- Jose Izquierdo has been directly involved in four of Brighton's last seven Premier League goals (2 goals, 2 assists).