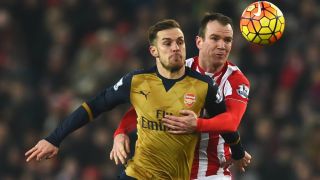 Arsenal manager Arsene Wenger has told Stoke City's fans they will not be proud of themselves later for aiming derogatory chants at Aaron Ramsey on Sunday.

The Wales international suffered a serious leg break as a result of a challenge from Stoke defender Ryan Shawcross in February 2010, an injury which caused him to miss much of the rest of that year.

Ramsey was booed and jeered by sections of the crowd at the Britannia Stadium during a 0-0 draw between the teams on Sunday, while some fans chanted "he walks with a limp" at the 25-year-old.

Wenger believes ignoring such behaviour is the only suitable way to deal with it but he also claimed some people may be ashamed of themselves if they hear a repeat of their actions on television.

"I don't listen much. I focus on the game and I shut my ears. I think that's the best way to deal with it," he told the media.

"I don't know what can be done about it. When people get together they sometimes forget their individual responsibility. Maybe when they go home and watch it on television they are sometimes less proud."

Mesut Ozil missed the game but Wenger is confident he will be fit to return to action for next Sunday's crunch clash with Chelsea.

"He had an inflammation in his foot and he was not very well yesterday morning," Wenger explained. "He was already not 100 per cent at Liverpool so I decided to leave him out. I think he should be back next Sunday."

The Arsenal manager also suggested Alexis Sanchez could be back for next weekend's match.