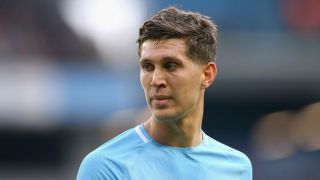 John Stones admits it has been "difficult" at Manchester City after falling out of favour with manager Pep Guardiola.

The centre-back has struggled to earn a regular place in the team since suffering a hamstring injury in November and has played just nine minutes of the Premier League leaders' last six top-flight matches.

The 23-year-old, who signed from Everton for a reported £47.5million fee in August 2016, is frustrated with his lack of playing time but accepts City's consistency makes it tough to break back into the side.

"It's difficult," said Stones. "Every player wants to play week-in, week-out. But I've had games here and there, I've been fighting and that's all you can do: train hard, keep working hard and, when your chance comes, you've got to take it and that's what I've done.

"I've had the players' backing and the manager's backing. It's one of those things where the team's winning games and playing well, and you can't get back in just like that.

"I've got to keep working hard and that's what I’ve been doing, still learning while I'm on the sidelines, that's a massive thing. You can't switch off and, when your chance comes, you're ready to take it."

Despite his lack of club football, Stones earned a spot in the latest England squad and played the full game as Gareth Southgate's side claimed a 1-0 friendly win over Netherlands last Friday.

Southgate is a keen admirer of the former Barnsley youngster, having coached him at England's Under-21 level, and has made it clear he wants to build a team using defenders who are comfortable playing the ball out from the back.

And Stones thinks working under Guardiola makes it easier to adapt to the England boss' demands.

"I think we try to bring all the attributes and what we learn under Pep into the England squad, and are open to learn from Gareth as well," he said. "It stands us in good stead.

"We work hard on the training pitch under Pep, learn a lot of things, different styles of play, how to play against different formations. I think it gives you that head start coming into England, and we can share our ideas as well.

"The manager picks his players knowing what he wants, and he picks wisely. It's good that every team plays a similar type of football, and we come here and it gels together. Players do it at their clubs, so it's not a massive difference when we come here. That's a big thing. If you're trying to change everyone's style of play, it's not going to happen."