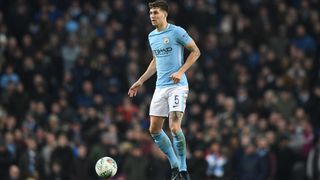 Manchester City defender John Stones warned his team their quadruple chase would take its toll as the season goes on.

City are still eyeing four trophies this campaign, although their bid to match the 'Invincibles' was ended with a Premier League loss to Liverpool earlier this month.

Stones said while manager Pep Guardiola would rest players when possible, the desire to win every competition was sure to play a part for City.

"We obviously wanted that [to go undefeated in the league], and I'm sure every team does, but it's such a difficult thing to do," the England international told UK newspapers.

"The four competitions we're still in, the amount of games compared to some other teams, you know it takes a toll, no matter how much you rotate the squad.

"I think sometimes you've got to hold your hands up and say, 'we gave it our best shot', which we did. I think we've just got to move on."

A fit and healthy John Stones on his return from injury! January 22, 2018

While City were beaten in the Premier League, they are still 12 points clear of rivals Manchester United at the top.

Stones denied suggestions the bid to go undefeated had put unnecessary pressure on Manchester City, who carry a 2-1 lead to Bristol City for the second leg of their EFL Cup semi-final on Tuesday.

"For me personally it wasn't an added pressure. I think you kind of want to make it happen, it's not so much a pressure, but on the other hand you could say it's a bit of pressure that's been released from us," he said.

"Some people might've been thinking it: could we go unbeaten and when is it going to happen?

"That could've been going through people's heads. From what I know it wasn't, it's one of those things where we've got to take it, re-evaluate, look at the game, look at positives, negatives, everything about it and go about business like we have been."