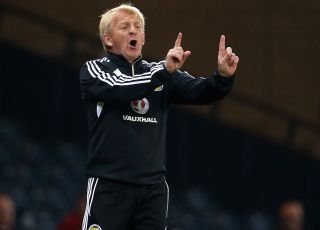 Strachan recalled Kris Boyd for the Scots' friendly with Norway on Tuesday after three years out of the national team, and was keen to stress anyone could earn a place in his squad if they play well for their club.

Boyd has scored six goals in 12 matches for Kilmarnock this season, form that convinced Strachan to bring him back into the international setup.

And the former Middlesbrough boss was quick to assure others that, if they performed, they will be rewarded.

"Everybody has to play well every week (for their club)," he said ahead of the clash in Oslo. "Age is no barrier, it is up to these players to show they want to be there.

"Play well for your club and the Scotland thing takes care of itself."

Injuries to Steven Fletcher, Jordan Rhodes, Matt Phillips and Ross McCormack have depleted Strachan's squad ahead of their trip but he remains positive about their chances.

The 56-year-old called youngster Stuart Armstrong as well as Boyd for their final game of the year, and has been pleased with the changes

"We've got freshness," he added. "There's a wee change of emphasis in terms of how we're going to try and play.

"We've worked on a certain way of doing things and that was good.

"We don’t have individual ability (other teams do), so we have to do a lot more than certain teams."