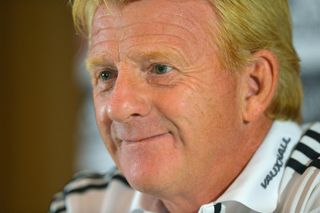 Scott Brown's solitary second-half goal was enough to secure victory for Strachan's side, but it was the Scots' rearguard action that won all the plaudits, with Cardiff goalkeeper David Marshall making a number of impressive saves to give his country a third consecutive clean sheet.

Strachan was quick to acknowledge the contribution of Marshall and the defence in front of him, although he admitted that his side were lucky to come away with the win.

He told BBC Scotland: "We were fortunate. We had some great defending and a terrific goalkeeper.

"We feel that we could have done a lot better. We never really got going in the first half.

"We played so far away from each other that it was difficult to put a combination of passes together, particularly on a rough surface."

The former Celtic boss also hinted that he is already keenly anticipating the draw for the UEFA Euro 2016 qualifiers, and admitted that he would be grateful if his team avoided Tuesday's opponents.

"I wouldn't really want to see them when the draw comes out," he added. "They're not bad.

"They played well. It was an interesting system they played. Their players as individuals probably did better than ours.

"(But it is) another away victory, which was good."

Strachan also believes that there is now genuine competition for places in his squad, adding: "The attitude's decent, that's good. We have got a lot of other players to call on, that's for sure.

"So there is things we can take away as we get on the plane tonight. No goals against us in three games against very good opposition, which is good.

"Everybody that's been with us this week has impressed in one way or another. They've given us something whether it's on the pitch or off the pitch. So nobody has let themselves down that way."