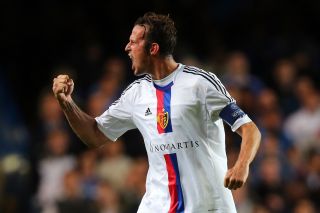 Streller capitalised on poor defending at a corner to beat Petr Cech at his near post and seal a 2-1 win for the Swiss side, who had trailed to Oscar's first-half opener before Mohamed Salah levelled with 19 minutes remaining.

Asked if he had expected his team to triumph at Stamford Bridge, where Chelsea had not previously lost a Champions League group game in almost 10 years, Streller told Sky Sports: "We always expect it but we knew it would be a tough game.

"After (Basel got back to) 1-1 I felt Chelsea had a problem and I said to my boys 'listen, we can win here' … and they listened to me!"

Basel's success against Chelsea was a landmark one as it represented their first European win in England.

"I want to say it's a miracle," added Streller. "Now we are getting more experienced and we can win here in Chelsea.

"It's unbelievable. I think people in England will know that we are a team to be reckoned with."

Basel manager Murat Yakin was understandably delighted but made it clear much work still lies ahead for his side if they are to qualify from Group E, which also contains Schalke and Steaua Bucharest.

"We will remain humble now and know that all we did was win the first game," said Yakin.

"A huge compliment to my team. After years we have finally managed to win a game over here.

"We will continue to focus on one game at a time. We will analyse the match and on Sunday we are back in action in our league campaign."