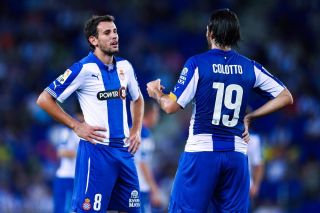 The striker is expected to lead the line at the Vicente Calderon as Espanyol look to extend their four-game unbeaten run in the league.

Atletico are the first of last season's top three that Espanyol will meet in this campaign and Stuani knows they must raise their game if they want to emulate Valencia's win prior to the international break.

Diego Simeone's side suffered a 3-1 at the Mestalla but are unbeaten at home in their last 23 games, a run that stretches back to the end of the 2012-13 campaign.

"If we don't equal them in intensity then we've no chance because they play at 1000 kilometres-an-hour," Stuani said.

"We will be facing a very, very tough opponent, one that is strong at home and rarely drops any points there. They will be very hard to beat and we must concentrate fully.

"This week we've worked hard to be physically strong for this game. If we are strong at set pieces we have a good opportunity of beating them.

"This is one of the most difficult places to come to, somewhere legendary, and it'll be a hard ask to win.

"However, we are in a good run of form and can cause an upset."

Espanyol have not won at the Vicente Calderon since November 2010, when Pablo Daniel Osvaldo struck a late winner to secure a 3-2 victory.