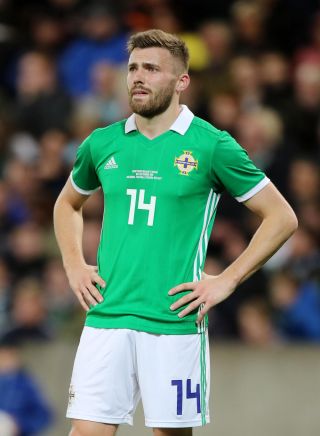 Stuart Dallas believes that the draw may have been harsh but the fixture list has been kind to Northern Ireland as they begin their Euro 2020 qualifying campaign this week.

Michael O’Neill’s side start the qualifiers on Thursday night against Estonia at Windsor Park, on paper the easiest game in a group which has also paired them with Belarus, Holland and Germany.

Northern Ireland will face Estonia and Belarus home and away before taking on the mighty Dutch and Germans, giving them a chance to build momentum and put points on the board.

“People will probably look at the group and see Germany and Holland and just think, ‘Northern Ireland have no chance’ but with the way the fixtures have fallen it has given us a lot more confidence,” Dallas said.

“I think we’ve got to win these two games and then the summer becomes massive for us.

“Without being disrespectful to the opposition, these are games we have to win and if we can do that and take maximum points it puts us in a good position.

“In previous campaigns that momentum has helped us and we’ve shown we are hard to stop.

“That would then leave the bigger nations coming to us later on in the year needing to win, and Windsor Park wouldn’t be a nice place to come to needing a result.”

Dallas has found himself playing in several different positions both for club and country, often pushed back from the wing into a right-back role, but remained one of Northern Ireland’s most consistent players throughout last year’s frustrating Nations League campaign.

An injury has slowed him since then and cost him several months of Leeds’ promotion push but the 27-year-old feels ready to perform this week.

“It’s up to the manager but I’ll always give everything I have no matter where I play,” he said.

“I’ve been asked to play in a number of positions this season that aren’t my strongest position but I just get on with it. I just want to play.”

Though frustrated to watch on from the sidelines for much of it, Dallas said he has been relishing Leeds’ battle with Norwich and Sheffield United at the top of the Championship, with the three clubs scrapping tooth and nail for the two automatic promotion places.

“It’s enjoyable,” he said. “If you don’t enjoy where we are you are playing the wrong game. You’d much rather be challenging for promotion than being in a dogfight at the bottom end of the table.

“We missed a chance last week (a 1-0 loss to Sheffield United) but we have eight games to go.

“We are under no illusions about how hard it’s going to be and everyone is capable of beating everyone else in that league.

“Everyone keeps thinking Leeds are going to blow up but I can assure you now we won’t.

“When you have something to fight for like a place in the Premier League you can’t give up.”