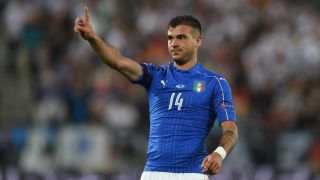 Juventus midfielder Stefano Sturaro has revealed his delight at returning to action after a long spell on the sidelines through injury.

Sturaro made his first appearance of the season against Empoli on October 2 and is in contention to play against Udinese in Serie A on Saturday after recovering from a medial collateral ligament problem.

The Italy international, who featured for his country at Euro 2016, accepted it has been a difficult period for him due to the injury, especially as it ruled him out of the first few games of the new campaign, but he is positive about the future.

"It's been a tough past three months but I'm delighted to be finally back in action," Sturaro told Sky Italia.

"It's never easy getting back up to speed when the campaign has already started. The start of pre-season is the key time to build up your fitness.

"I'll still need a few matches under my belt before I can really get back to my best but in the meantime I'll continue to give my all in training; it is the only way to ensure that you're ready when the call comes to enter the action."

Juventus coach Massimiliano Allegri is also boosted by the return of Claudio Marchisio, with Sturaro highlighting the impact the pair can have for the league leaders, who face Lyon in the Champions League next week.

"I'm just as pleased about my own comeback as I am about Claudio Marchisio's," Sturaro said. "With the two of us returning, the coach will have an extra pair of bodies to ease the workload on the guys who have started the season so well.

"As ever, my focus is solely on moving the team forwards regardless of where I play on the field: an improving Juventus is to the benefit of every single one of us in the squad.

"We all know how important the next few weeks could be, just as they were this time last year. We're in a good position and we're training very well.

"We've made some excellent additions to the group, all of whom have come here to take Juve as far as they can. There are some huge encounters with direct title rivals coming up and we will need to be ready for them.

"The desire of this team is there for all to see, particularly in the Champions League, a competition that any side would give anything to win. Our mentality hasn't changed at all; our goal is to enjoy our football, give our all and whatever happens, happens."