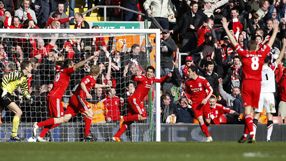 The Uruguayan, who joined Liverpool from Ajax Amsterdam on deadline day in January when he was known better as the villain whose hand ball cost Ghana a place in the World Cup semi-finals and who has served a seven-match ban for biting, was the architect of Sunday's 3-1 win.

Dutch forward Dirk Kuyt hit a hat-trick but each of his goals were due in large part to Suarez, who if he continues with this form will soon have Liverpool fans saying "Fernando who?" as he amply plugs the gap left by Spain striker Torres' departure to Chelsea.

"The first goal was unbelievable and Luis showed a bit of magic like he did at West Ham last week when he set up Glen Johnson's goal," Kuyt said on the club's website.

"I wanted to let the ball go but I wasn't sure if it was going in so I just wanted to make sure, but it was more his goal than mine."

Suarez had twisted and turned as he dribbled past Rafael, Michael Carrick and Wes Brown before firing the ball past Edwin van der Sar at an impossibly tight angle with Kuyt on hand to help the ball in for Liverpool's 34th-minute opener.

Five minutes later his cross was accidentally headed towards Kuyt by unfortunate United winger Nani for the Dutchman's second goal and the third came midway through the second half after Suarez's free-kick was spilled by Van der Sar and Kuyt pounced.

The goals aside, Suarez was a constant threat as fans were mesmerised by his footwork made all the more noticeable by his orange boots. He left the field to a standing ovation and a feeling that this was 26.5 million euros well spent.

The 24-year-old was one half of a double purchase made to replace Torres, who left for champions Chelsea for £50 million while in something of a rut for Liverpool and has yet to score for his new club.

Fans were given a glimpse of the other half, Andy Carroll, who came on for the last quarter of an hour after being sidelined with a thigh injury.

The former Newcastle centre-forward's first touch was a header straight at Van der Sar and although he made little other impression, he was thrilled to have made his Liverpool debut.

"When I was running back, all the fans were shouting and screaming and so I got a little bit excited. I was over the moon to get on there and get back playing," the Englishman said.

The only difference between the team named by Kenny Dalglish to start against United compared to one predecessor Roy Hodgson could have picked when they were dicing with relegation was Suarez and yet they were completely unrecognisable.

Dalglish's return in January to the hot seat at the club he brought so much success to as a player and manager before leaving 20 years ago has lifted spirits and league position.

While a challenge for the title is out of the question, a late charge for a Champions League berth may not be if others slip up and Suarez continues to bamboozle his markers.

"Moving from 20th to sixth is not as big a problem as moving from two to one, so the highe