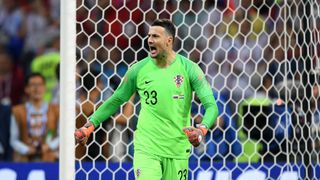 Croatia shot-stopper Danijel Subasic has been the best goalkeeper at the World Cup, according to former international Joey Didulica.

Subasic has produced heroics for Croatia through the knockout stage, including delivering in penalty shoot-out wins over Denmark and Russia.

The Monaco goalkeeper, 33, shapes as again being key for Zlatko Dalic's men as they head into Sunday's World Cup final against France in Moscow.

Didulica, the former Croatia shot-stopper who made four appearances for the nation and was part of the 2006 World Cup squad, believes Subasic deserves to win the Golden Glove.

"He's brought home the win in a few games and if you look around, the keepers that have done that, I think [Denmark goalkeeper Kasper] Schmeichel had done that," he told Omnisport.

"But I think Subasic now getting into the final would be definitely the best keeper of the tournament in my opinion."

Didulica was full of praise for Subasic's approach, suggesting he was even confident heading into penalty shoot-outs.

"He's been outstanding. He's such a presence isn't he?" he said.

"I actually feel confident going into a penalty shoot-out. He's got presence.

"Once again you see how loved he is as well by all the boys there and he's a leader. You can see it through his goalkeeping, on and off the park."