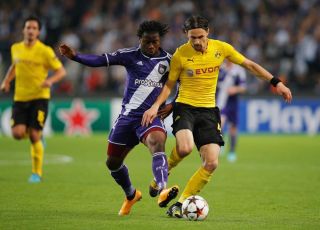 Dortmund visit the Turk Telekom Arena in dreadful form in the Bundesliga having lost four of their last five in the German top flight.

By contrast, Jurgen Klopp's men have two wins from two in the Champions League and can take another step towards qualification from Group D with three points in Istanbul.

And Subotic believes a decent performance could give Dortmund the self-belief to turn things around domestically.

"We are hopeful, we can fill up confidence with a victory," Serbian defender Subotic told Dortmund's official website.

"In the phase we are in, it would be important to have a sense of achievement once again."

Subotic has been relatively pleased with Dortmund's performances in all competitions this season, but knows they will need to be at their best to take maximum points from Wednesday's tricky away clash.

"We have played good games in the Champions League but in the Bundesliga they were not too bad," he added. "The difference is [in the Bundesliga] the errors have been exploited by our opponents.

"It will be a tough match [against Gala]. We must be especially concentrated.

"We have to give everything to turn the tide. As I said, [we need to] regain self-confidence in a phase where we're not bursting with self-confidence."