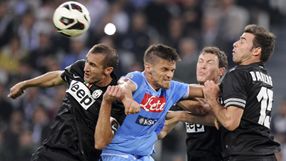 Champions Juve scored twice in as many minutes late in the second half through Jose Martin Caceres and Paul Pogba to win a hotly-contested match in Turin that saw Antonio Conte's side stretch their unbeaten league run to 46 games.

Caceres netted a powerful header after 80 minutes and Pogba wrapped up the victory over second-placed Napoli with a stunning volley two minutes later to score his first goal for the club.

"It was a difficult match for us. We deserved to win," Caceres told Sky Sport Italia. "It's fundamental for us that we can look at the bench and ask for them to change a match."

"This doesn't change anything however, this is only three points. There are still 30 matches to go."

Napoli were second best for much of the game but almost opened the scoring after 26 minutes when striker Edison Cavani crashed a free-kick against the bar from a tight angle.

Despite being the dominant side, the closest Juve came to scoring in a tight first half was in added time when Claudio Marchisio struck a powerful shot from the edge of the area that Napoli keeper Morgan De Sanctis did well to tip over the bar.

Sebastian Giovinco was a constant thorn in Napoli's side and should have given Juventus the lead 10 minutes into the second period but, after working some space in a tightly packed area, he blasted his shot wide with the goal at his mercy.

Juve's Alessandro Matri also wasted a good chance after 65 minutes when he failed to control a beautiful long pass from Andrea Pirlo eight metres out with only De Sanctis to beat.

However, Conte's determined team were not to be denied and with 10 minutes to go Caceres headed firmly into the net from Pirlo's corner two minutes after coming on for Kwadwo Asamoah.

In the late game, Lazio stayed within four points of Juventus, who have 22 from eight games, after a nervy finish against Milan who they led by three goals after only 49 minutes.

Lazio took the lead in the 24th when Hernanes' smart dribbling ended with his shot being deflected by Daniele Bonera over the stranded Marco Amelia for his fifth goal this season.

Lazio were clearly the better side, however, and doubled their lead after 41 minutes through Italy international Antonio Candreva, whose swerving long-range rocket shot whizzed past the suprised Amelia into the top right-hand corner of the net.

Miroslav Klose piled on the misery for Milan coach Massimiliano Allegri four minutes into the second half, finding a yawning gap in their defence and beautifully volleying Candreva's pinpoint long pass home.