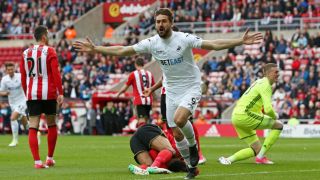 Swansea City took a giant step towards Premier League survival with a 2-0 victory at relegated Sunderland on Saturday.

The win moved Paul Clement's impressive side four points clear of third-bottom Hull City, who will slip into the Championship if they lose at fellow strugglers Crystal Palace on Sunday.

Sunderland won 2-0 at Hull last weekend but a similar result never appeared likely as the Welsh side cruised relatively untroubled to their fourth away win of the season.

Gylfi Sigurdsson was at the heart of most of Swansea's best moments and he supplied the free-kick from which Fernando Llorente nodded in after nine minutes with Kyle Naughton thundering home a second mere seconds before the break.

Sunderland had hoped to give the likes of Jermain Defoe and Jordan Pickford a rousing send-off on what was likely to be their final home appearances in red and white before they seek pastures new at the end of the season but, instead, David Moyes' men turned in another abject performance that displayed exactly why they prop up the top flight.

Repeated chants of "we want Moyes out" echoed around the Stadium of Light as if to demonstrate the frustrations of the Wearside faithful with another spell of upheaval on the agenda between now and August.

Despite the backdrop of dissatisfaction, Sunderland started the brighter, Didier Ndong firing wide when well placed on the right side of the box.

But Swansea gradually gained a foothold and took the lead in the ninth minute courtesy of their star attacking duo.

Sigurdsson, the player with the most Premier League assists in 2017, whipped in a wonderful free-kick from the right and Llorente rose above an uncharacteristically hesitant Pickford to nod into the unguarded net.

Sigurdsson tested Pickford with another free-kick nine minutes later as Swansea continued to boss proceedings, much to the irritation of the bulk of the 38,781 fans in attendance.

Defoe saw a half-chance snuffed out by Swansea goalkeeper Lukasz Fabianski after 35 minutes but it was a fleeting moment of hope for the home supporters, who saw Swansea double their lead before the break.

Sunderland had several opportunities to clear their lines but dithering defending enabled former Black Cats loanee Ki Sung-yueng to gain possession in midfield and he brilliantly threaded the ball through to Naughton to fire home his first Premier League goal with the final kick of the first half.

1 - Kyle Naughton has scored his first ever Premier League goal in what is his 141st appearance in the competition. Joyous.May 13, 2017

Swansea were content to sit back in the second period and it almost backfired as Sunderland threatened sporadically to make a game of it.

The hosts ought to have had a penalty after 58 minutes with referee Andre Marriner inexplicably failing to spot Sigurdsson blocking Sebastian Larsson's free-kick with his outstretched arm.

Khazri could easily have been dismissed for a needless stamp on Sigurdsson - Marriner deeming it only worthy of a booking - but it was a rare moment of fight from Sunderland as Swansea cruised to a win that puts them firmly in the driving seat in the battle to beat the drop.