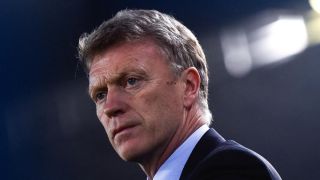 The former Manchester United manager, who has been out of the game since being sacked by Real Socieded in November 2015, only a year after his appointment, has signed a four-year deal.

Moyes oversaw a series of top-half campaigns during his 11 years in charge of Everton and will be looking to improve on Sunderland's 17th-place finish in last season's Premier League.

Allardyce took over at the Stadium of Light in October and led the club to survival before being handed the change to manage England following Roy Hodgson's departure after a poor Euro 2016.

Moyes has been away from the Premier League since being sacked by United in April 2014, nine months after taking over from Alex Ferguson in the Old Trafford dugout.

"I am delighted to have joined Sunderland. I am relishing the challenge and excited by the opportunity," Moyes said in a club statement.

"I have taken over a big British club, with a great support and I'm looking forward to working in the Premier League again.

"I look forward to continuing the good work done by Sam."

Sunderland chairman Ellis Short revealed he has long coveted Moyes and believes he has the best man available at the helm three weeks ahead of a tough Premier League opener at Manchester City - themselves under new management in the form of Pep Guardiola.

"We are absolutely delighted to welcome David Moyes to Sunderland, who was by far and away our first choice," Short said.

"He is a man whose football pedigree speaks for itself and is someone I have long admired. I have spoken with him on many occasions and I have always been hugely impressed.

"He was my number one managerial target for the last five appointments, but his desire to honour existing contracts meant we were not able to bring him to Sunderland previously. To be able to finally welcome him as our manager is fantastic news for the club."

Sunderland have changed their manager during each of the past five top-flight seasons, customarily while embroiled in relegation trouble, and Short added: "The fact that David has committed to a four-year deal is a clear demonstration of his belief in what he can achieve here.

"It is our aim to become a better, stronger and more stable football club and with a manager of David's calibre and experience at the helm, we have a fantastic opportunity to begin looking upwards, rather than downwards every season."